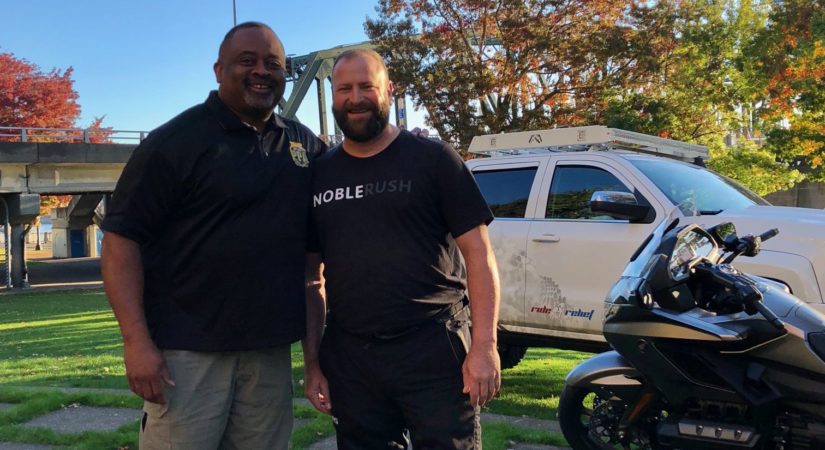 Portland, OR – First responders are particularly vulnerable to Post Traumatic Stress Disorder (PTSD) due to the amount of consistent first-hand exposure to extremely stressful and traumatic experiences. As we understand more about the mental health impact and how PTSD and Post Traumatic Stress Injury (PTSI) is becoming an epidemic in first responder professions, State Representatives Andrea Salinas and Paul Evans joined public safety officers today to announce the introduction of new legislation recognizing PTSD/PTSI as an occupational illness in Oregon. The bill helps protect our public servants who put themselves on the front lines for our communities every day.

“Given ongoing budget constraints and increased pressure on fewer responders, we must recognize the costs we are incurring in the lives of those we send out to defend us,” said Rep. Evans, “It’s the right thing to do.”

To commemorate the announcement, retired police officer and fire fighter Jeff Shepard made a stop in Portland on his West Coast Ride 4 Relief Tour to bring awareness to first responders living with PTSD/PTSI. Shephard was diagnosed with PTSD after an ambush shooting in his police patrol car. He underwent therapy, returned to work, and realized his life-long dream of becoming a motor officer. But within the first year of Shepard’s career on a motorcycle, he was the target of an explosion that turned his life upside down. He quickly discovered there was little support or information for officers specifically struggling with what felt like the shame of PTSD and he was medically retired from his department.

Shepard said, “I recognized there was an epidemic of first responders dealing with the same thing I was.” This inspired Shepard’s fierce advocacy and the Ride 4 Relief, providing an opportunity for conversation to bring people together in support of those who sacrifice so much for our safety.

Groups representing police officers (Oregon Coalition of Police and Sheriffs-ORCOPS), fire fighters (Oregon State Fire Fighters Council-OSFFC), and corrections officers (Association of Oregon Corrections Employees-AOCE) worked together to craft legislation that makes a very simple change to the state statute. Currently, there is a very high bar that our public servants face when having to prove the cumulative trauma of stress disorders such as PTSI. Instead of these employees having to prove that their trauma-stress related disorders are employment-related, the employer would be required to prove that they are not.

“There is a stigma attached to PTSD and officers may be reluctant to seek treatment or file a claim because it’s incredibly difficult to prove that it’s employment-related. This legislation helps remove that stigma and supports better mental health,” said Daryl Turner, President of ORCOPS and the Portland Police Association.

The PTSD/PTSI presumption legislation strengthens our support of police, fire fighters, and corrections officers in several ways, including:

“Each lawmaker we have approached recognizes that access to mental health treatment for our public safety servants is paramount to a safe Oregon and have pledged their unwavering support of this concept,” said Karl Koenig, President of OSFFC.

The PTSD/PTSI presumption legislation helps police, fire fighters, and corrections officers get the help they need after a job-related trauma.

The Oregon Coalition of Police & Sheriffs (ORCOPS) is a non-partisan organization that advocates on behalf of police officers, deputy sheriffs and other individuals in Oregon law enforcement agencies. ORCOPS serves as a source of leadership within the law enforcement community and aims to build trust between law enforcement officers and the communities we serve.